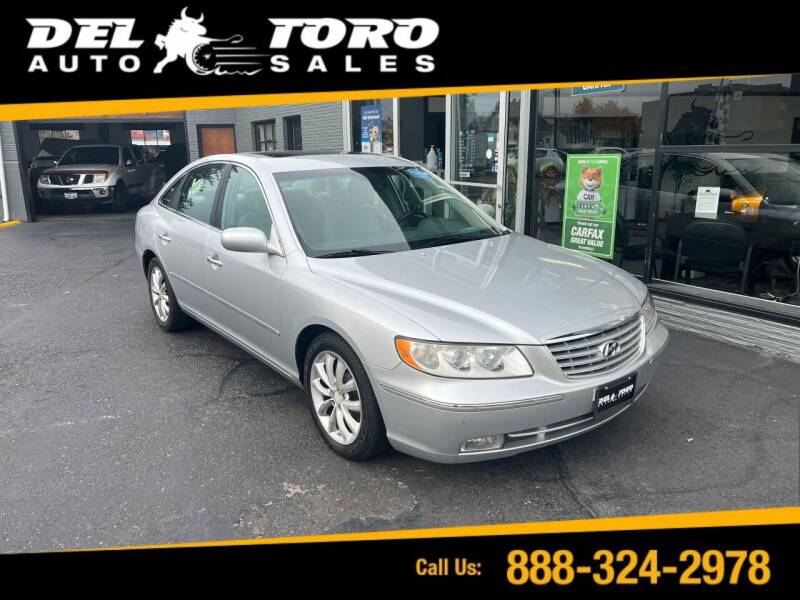 Vehicle overview Hyundai's first attempt to go after the big boys of the sedan world came in 2001 when it introduced the XG300 (later renamed the XG350). Armed with a lengthy standard features list, the XG was meant to be a budget alternative to segment leaders like the Toyota Camry and Honda Accord. The car's bland looks and uninspired performance made this effort a failure, but Hyundai was undeterred. The company returned to the drawing board, replacing the XG with an all-new model, the Azera, in 2006. The second time's the charm, it seems, for the 2007 Hyundai Azera is much more universally appealing than its middling predecessor. Longer and wider, this Hyundai sets its sights on the full-size-sedan market, with as much real-world interior room as cars like the Toyota Avalon, Chrysler 300 and Buick Lucerne. The Azera may be inexpensive, but don't think that means it looks or feels cheap. With its tasteful chrome grille and crisp body lines, this sedan looks more like an Acura than a Hyundai. Inside, things are similarly upscale. With tasteful use of faux wood and metallic piping, the Azera's cabin is pleasing to look at and brimming with a full complement of available premium features, such as rain-sensing wipers and a power-tilt/telescoping steering wheel. On the road, this Hyundai rides and handles with a poise and refinement that belies its modest price tag. So how does the 2007 Hyundai Azera stack up against segment leaders like the Avalon and 300? Well, the Toyota is still the way to go if you plan to put three people in the backseat (because of its flat rear floor) or you desire high-end features like a navigation system and adaptive cruise control. And the rear-drive Chrysler will be more appealing to buyers for whom style and performance are most important. However, for full-size sedan buyers whose tastes fall somewhere in the middle, the Azera is a strong candidate. It's stylish yet unassuming, comfortable yet agile, and luxurious yet modestly priced. #carshow #cars #carsofinstagram #drive_#driver #auto #carshows #carlifestyle #audi #tires #bmw #mercedes #sportscars #ferrari #lamborghini #customcars #classiccars #chevy #classic #carsdaily #honda #car #autos #camaro #porsche911 #wheels #porsche #vehicles #vehicle #nissan # altima #toyota #Ford # Mustang #Chevrolet # BMW #Accord

Take a safe, no-commitment test drive in a clean vehicle that’s conveniently brought to your home for risk-free, hands-on experience.

Delivery to your doorstep! Find local dealers in your area who will bring your newly purchased and freshly cleaned vehicle directly to you.

Unless prohibited by applicable rules or regulations.

All vehicles are one of each. All pre-owned or certified vehicles are used. All prices are cash prices. A dealer documentary service fee of up to $150 may be added to the sale price or capitalized cost. All offers expire on close of business the day subject content is removed from website, and all financing is subject to credit approval. Prices exclude tax, title, and license. All transactions are negotiable including price, trade allowance, interest rate (of which the dealer may retain a portion), term, and documentary service fee. Any agreement is subject to execution of contract documents. It is the customer's responsibility to verify the existence and condition of any equipment listed.

Enter your phone number or email address to receive this VIN

Success! Your message has been sent.

Uh oh! There was an error sending your message. Please try again in a few moments.