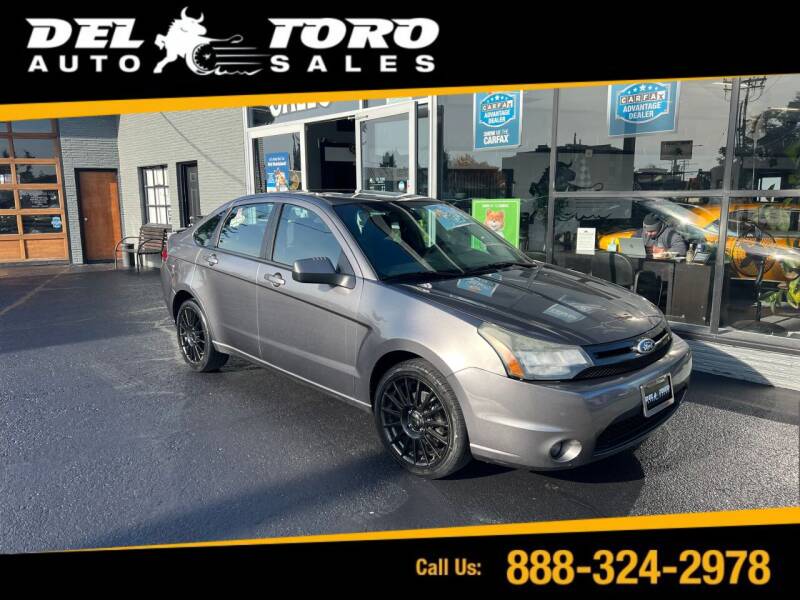 Performance & mpg 2010 Ford Focus models are powered by a 2.0-liter inline four-cylinder engine that produces 140 horsepower and 136 pound-feet of torque. A cleaner version of that engine that earns PZEV tailpipe-emissions certification is also available for California-emissions states. That engine makes 132 hp and 133 lb-ft of torque. The standard transmission on all Focus trim levels is a five-speed manual. A four-speed automatic is available as an option. The automatic on SES coupes is geared slightly shorter for better acceleration. In testing, an automatic Focus coupe went from zero to 60 mph in a lackluster 9.7 seconds. Fuel economy for the Ford Focus is rated at 24 mpg city/35 mpg highway and 28 mpg combined for the manual transmission. Opting for the automatic drops the highway estimate to 33 mpg. Safety Six airbags are standard on all Focus models, including front-seat side-impact airbags and side curtain airbags for both front- and rear-seat occupants. For 2010, antilock brakes and stability control are now standard on all trim levels. Also new for the 2010 Focus is Ford's programmable MyKey system, which allows parents to specify limits for vehicle speed and stereo volume for their teenage drivers. In government crash tests, the 2010 Ford Focus sedan earned four stars (out of a possible five) for its protection of front occupants in head-on collisions. In the side-impact test, the sedan received five stars for protection of front occupants and four stars for protection of those in the rear. Curiously, the Focus coupe earned a five-star rating for frontal impacts but just a three-star rating for front and rear side-impact protection. The Insurance Institute for Highway Safety gives the Focus coupe a top rating of "Good" for frontal-offset and side crash protection. The Focus sedan also earns a "Good" rating for frontal protection, but receives a downgraded "Acceptable" for side impact protection. Driving Behind the wheel of the 2010 Ford Focus, you'll likely be pleased with the relatively quiet and smooth ride quality. Engine performance is also respectable for a small car, but the four-cylinder can sound noisy and the four-speed automatic is increasingly outdated by competing models' five-speed units. To its credit, the Focus has commendable steering response and feedback along with a decent amount of grip when driven hard. But those hankering for a bit more fun are going to be happier with a Honda Civic or Mazda 3. Interior At night, the cabin of the 2010 Focus has a high-tech feel about it, thanks to a soothing cool blue glow from the gauges and optional customizable ambient lighting. But these lighting effects do little to mask some interior missteps, including cheap-looking plastic interior bits and a button-heavy center stack that some people find a bit confusing. Despite having a non-telescoping steering wheel and fairly flat front seats, comfort is adequate -- even for extended road trips. Luggage capacity is also suitable for road trips at nearly 14 cubic feet, with 60/40-split-folding rear seats at the ready for even more storage. One other nice attribute is Sync, a voice activation system that allows hands-free operation of mobile phones, iPods and other MP3 players. The 2010 Focus further increases Sync's appeal by adding the ability to acquire driving directions, traffic conditions and other information by pairing it with Bluetooth-enabled phones. #carshow #cars #carsofinstagram #drive_#driver #auto #carshows #carlifestyle #audi #tires #bmw #mercedes #sportscars #ferrari #lamborghini #customcars #classiccars #chevy #classic #carsdaily #honda #car #autos #camaro #porsche911 #wheels #porsche #vehicles #vehicle #nissan # altima #toyota #Ford # Mustang #Chevrolet # BMW #Accord

Take a safe, no-commitment test drive in a clean vehicle that’s conveniently brought to your home for risk-free, hands-on experience.

Delivery to your doorstep! Find local dealers in your area who will bring your newly purchased and freshly cleaned vehicle directly to you.

Unless prohibited by applicable rules or regulations.

All vehicles are one of each. All pre-owned or certified vehicles are used. All prices are cash prices. A dealer documentary service fee of up to $150 may be added to the sale price or capitalized cost. All offers expire on close of business the day subject content is removed from website, and all financing is subject to credit approval. Prices exclude tax, title, and license. All transactions are negotiable including price, trade allowance, interest rate (of which the dealer may retain a portion), term, and documentary service fee. Any agreement is subject to execution of contract documents. It is the customer's responsibility to verify the existence and condition of any equipment listed.

Enter your phone number or email address to receive this VIN

Success! Your message has been sent.

Uh oh! There was an error sending your message. Please try again in a few moments.